of lung cancer survivors, in addition to passionate donors and cyclists. There are various nonprofits for lung cancer, and some also host cycling events, creating competition for Ride Hard, Breathe Easy. Two of these organizations include the American Lung Association and the American Cancer Society. These organizations also fundraise and raise awareness of the disease; but Ride Hard, Breathe Easy is unique because it is centered around the idea of cycling to raise awareness.

PRowl Public Relations has been contracted by Ride Hard, Breathe Easy to work on different public relations tactics. These tactics include elevating their social media, creating a quarterly newsletter, revamping their website, as well as coordinating different events to fundraise and generate awareness.

As part of the elevation of Ride Hard, Breathe Easy’s social media, PRowl created a comprehensive monthly social media calendar to reflect the organization’s mission, goals and events. A social media campaign was also created to promote and generate awareness of the Wine Hard, Breathe Easy event. The firm also created a quarterly newsletter to inform the public about the nonprofit’s events, fundraising, news clips and other important information.

PRowl also led a cycling event at Temple University, called “Ride to The Moon,” in hopes of adding to the organization’s goal of biking enough miles to ride to the moon and back. The cycling class was taught by Temple student and PRowl Assistant Firm Director, Alaina DeLeone, who is a certified spin instructor. The event was successful with a great participant turnout. Ride Hard, Breathe Easy’s founder and president, John Matthews, was in attendance to cycle. He also spoke to participants about his organization before the event began. 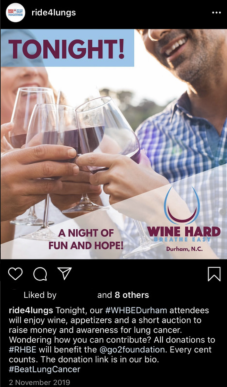 The success of these tactics was measured by the boost in Ride Hard, Breathe Easy’s social media presence and participant turnout in events that PRowl Public Relations helped coordinate. The Ride to the Moon event was well received by Temple Students and although the event was free, donations were accepted to contribute to benefit the GO2 Foundation for Lung Cancer.

To execute the plan successfully, PRowl Public Relations created an in-depth timeline which kept the firm on track with its execution of the strategies for Ride Hard, Breathe Easy. In September and October 2019, PRowl focused on brainstorming and creating a revamped website and engaging social media posts on behalf of RHBE. In September, PRowl created social media posts promoting an event for RBHE called “Wine Hard, Breathe Easy” on September 28, 2019. The event’s goals were to engage people through socializing while raising money and awareness for lung cancer. In October, PRowl redesigned Ride Hard Breathe Easy’s website. By having an updated website, it made it easier to find where to donate, general organization information, brand accomplishments and upcoming news. The updated website launched on October 30, 2019.

In November, the firm focused on Ride Hard, Breathe Easy’s Ride to the Moon event at Temple University. The event consisted of individuals coming together to #Ride4Lungs with the hope to create awareness for lung cancer and to bring Ride Hard, Breathe Easy’s mission to Temple University. The event focused on the goal of collectively riding 238,900 miles, the equivalent distance to the moon, using the mile-tracking app Strava. The event was free, but donations were accepted to support the GO2 Foundation for Lung Cancer. The foundation is the world’s leading organization dedicated to helping those with lung cancer.

PRowl created a press release before the event to give more insight into the event and get media coverage; PRowl also set up two tables before the event at the hotspot on Temple University’s campus to promote the event and persuade students to attend. The Ride to the Moon event occurred on November 16, 2019. Following the event, PRowl again focused on social media and conveyed the results of the Ride to the Moon event. Furthermore, PRowl also created social media content to keep RHBE active and announce the winning of the Bronze Award given by Guide Star USA for being a leading nonprofit.

The results for PRowl and Ride Hard, Breathe Easy were overwhelmingly positive. PRowl helped Ride Hard, Breathe Easy reach its goal of spreading awareness of lung cancer and receiving donations for lung cancer research. PRowl achieved its goal of high exposure of social media posts as the team kept track how many views, likes, shares and comments a post had. The team also tracked how often the #Ride4Lungs hashtag was used. The website revamp was also positive as the PRowl team tracked more traffic to the website. In the Ride to the Moon event, participants at Temple University rode 89,823 miles which was more than a 50% increase from the event in 2018.