March is Women’s History Month and companies everywhere are using this time to empower the amazing women that exist on our planet.

It is no secret that the relationship between advertising and women has been complicated at best, but brands this year have taken the time to truly do their research and figure out the best way to highlight the amazing and complex women in our world.

Nike released its “Dream Crazier” ad at the end of February during the 91st Academy Awards and launched us into Women’s History Month. The ad, voiced by Serena Williams, takes the “crazy woman” stereotype that is so often placed unfairly on female athletes and spun it on its head. Why is it bad to be crazy? Crazy is what got us here.

More locally, the Free Library of Philadelphia is hosting four powerhouse female writers throughout the month of March and then ending with two panels about diversity in writing called Vision 2020: Justice for All.

However, while these things are all well and good, my favorite campaign for Women’s History Month actually comes from a beer distributor (crazy, I know). 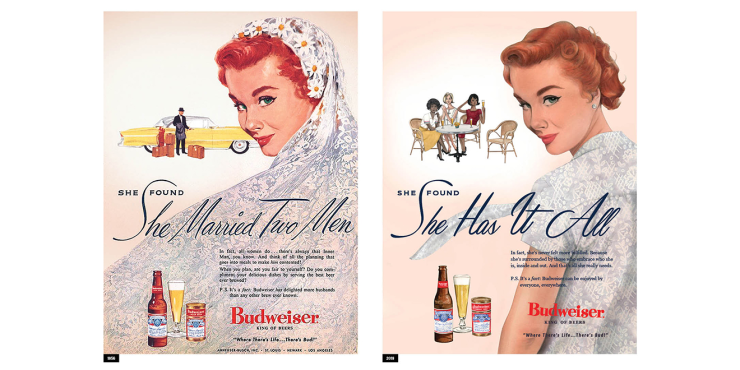 Beer has had a notorious relationship with women in the advertising since the beginning- in particular, Budweiser, but this year on International Women’s day they took some of their past, more questionable ads and revamped them for the new age.

I especially appreciate this because it would be very easy for Budweiser to ignore that these ads exist and move on with its life, but instead, they decided to highlight the stunning evolution that has taken place over the last 100+ years.

The relationship between advertisers and women has always bee a rocky one, and I admire Budweiser’s willingness to call themselves out for their own problematic past and rework it to their advantage.

The evolution of one’s company is an important thing to acknowledge because if we were to never bring up the past at all- history is doomed to repeat itself. Like BIC’s pink packaged pens or Dorito’s “lady-friendly” chips, for example.

Women’s history month is a phenomenal time to, as brands, appreciate and respect the women that work so hard to lift this world up.