2018 has been an eventful year so far. It seems as if there are PR stunts and successes nearly every month. With the year coming to a close in just a few months, let’s reflect on one of the biggest years of PR successes we’ve seen so far.

It all started in summer 2017 with an interview from Philadelphia Eagles offensive tackle Lane Johnson. Johnson said how he was confident the Eagles had a Super Bowl win in their future and promised he would pay for a beer for everyone that attended the parade. Bud Light jumped on the opportunity to create one of the most successful PR initiatives of the year. 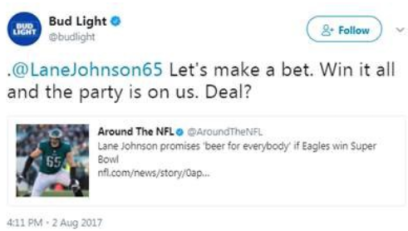 With the increase in odds of the Eagles winning, the odds also increased for the possibility of Bud Light distributing thousands of free cans of beer at the parade. The best thing about this PR stunt was that Bud Light actually kept their promise to Eagles fans. They knew that even though they would be giving away thousands of dollars of their product, it would create trust and the everlasting memory of Bud Light supporting the 1.5 million people of Philadelphia for a day in celebration of this great American achievement.

Nike’s latest PR success was something America needed more than anyone knew. With a long-standing battle with the NFL and players who have protested the national anthem due to the continued police brutality, Colin Kaepernick is a leader in the initiative to bring awareness to these injustices.

Nike took a huge risk by choosing the controversial Kaepernick as the face of their latest campaign. This campaign created concern among investors and resulted in their stock price dropping by 3%. However, this move was ultimately deemed a success because Nike brought in hundreds of millions dollars after the initial hit. The biggest impact came from athletes, customers, and potential customers who took to Twitter to discuss the issue with overwhelming supportive of Nike’s message.

IHOP Changes Their Name to IHOB 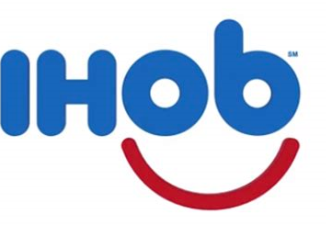 During summer 2018, IHOP made a change that nobody expected and quite frankly, nobody asked for. The International House of Pancakes made the decision to change their name to IHOB. The PR stunt was to promote menu items that were not part of their all-day breakfast menu. IHOP knew they had to make a statement, and it surely paid off. By the time the news broke, the campaign was already a worldwide trending topic on Twitter.

During the 2018 winter Olympics in PyeongChang, Intel made the opening ceremony one for the record books. Traditionally, the ceremony is celebrated with fireworks, but this year was different. Intel came up with the clever idea to have over 1,200 drones create intricate shapes in the sky. The reason why this was such a PR success was because the show was an innovative extravaganza. Intel had an international stage, which allowed Intel to create something that everyone will remember for a lifetime.

During May 2018, Starbucks closed thousands of stores around the United States for racial bias training after the company faced a scandal in one of their Philadelphia locations in April. During the incident, two African-American men were arrested for trespassing because they did not order anything during their time there. The managed called the police on these men, which resulted in their arrest.  The incident sparked a national outcry, which lead to CEO Kevin Johnson apologizing and promising to make sure that nothing like that would happen at a Starbucks again. Starbucks quickly began to make swift strives for change by creating trainings and new guidelines for managers and employees. Starbucks has shown that they can be trusted and are not afraid to call themselves out when they have done wrong and make sure those wrongs are made right.