Crisis communication is defined as “the process of protecting and defending an individual, company, or organization facing a public challenge to its reputation”, and this is one of the most important skills a company can possess. No matter how strong a company’s reputation is, it can lose its status in a matter of days due to an unforeseen circumstance. The ability to handle a PR crisis will help reduce these risks and lengthen a company’s lifespan; unfortunately, this is easier said than done. Here are three companies that have mishandled a crisis and had to suffer through the consequences.

In February of 2013, an Applebee’s employee posted an image of a receipt a customer had left for her during her shift. The customer had crossed out the 18% gratuity automatically printed onto the receipt, writing “I give God 10% – why do you get 18?” Frustrated, the employee uploaded the receipt to the internet, quickly gaining attention from many. Applebee’s management soon discovered the photo and the employee was fired from her job for violating customer privacy. 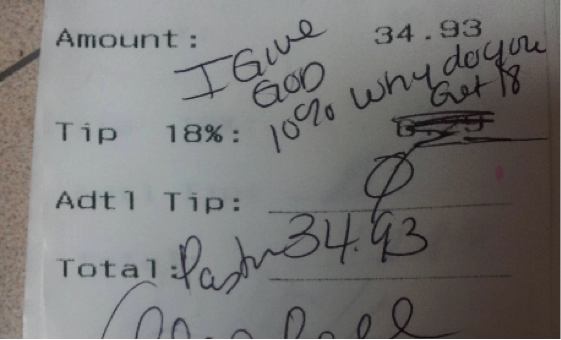 The internet went crazy after discovering the news, planning boycotts against the restaurant and posting angry comments on all of Applebee’s social media accounts. Applebee’s responded with a Facebook post later that afternoon, reading “We wish this situation didn’t happen…Our franchisee has apologized to the Guest and has taken disciplinary action with the Team Member for violating their Guest’s right to privacy.” The offhanded statement received a multitude of negative comments in response. Applebee’s continued to dig itself a hole throughout the night by deleting negative messages and arguing back and forth in the comments with frustrated consumers. The post amassed over 19,000 negative comments before Applebee’s eventually deleted the statement altogether.

In 2012, actor Woody Harrelson decided to advertise his new movie Rampart by doing a Q&A session on Reddit, a large online forum. Known on the website as an Ask Me Anything, or an AMA, many well-known celebrities, from Snoop Dogg to President Barack Obama, have taken to the website in order to allow users a better look into their lives. Many look forward to interesting discussions and facts about their favorite celebrities through the AMA sessions. Unfortunately, Harrelson and his PR staff seemed to have misunderstood the purpose of the Q&A. Whenever a user asked a question, he would attempt to direct attention back to his upcoming movie. It became clear that the AMA was planned more as a promotional interview than a way to connect with fans. The plan backfired, as Harrelson quickly became the butt of the joke with users mocking his PR blunder. Today, the trailer for the Rampart movie has over 1000 dislikes on YouTube, with the comments section filled with jokes referencing the incident.

In 2009, a video surfaced featuring two Dominoes employees doing a number of repulsive, unsanitary things to a pizza that was implied to be on its way to a customer’s home. The minute long video featured one employee placing cheese into his nose and then onto a sandwich while another employee narrated the vile acts. This video quickly spread throughout social media, with many second guessing whether or not they should continue to order food from the popular pizza chain.

Dominoes’ marketing staff seemed very unaware of the power of social media at the time, and as a result, they made the mistake of not responding immediately or aggressively, hoping that the situation would quiet down a little bit. When a statement was finally released, the situation had already escalated to an unmanageable point. Despite firing the offending employees and releasing statements, the chain still ended up losing a significant portion of its fan base.

Any future PR managers will be able to learn from these three PR slipups. The Applebee’s incident shows that a company must remain patient and levelheaded when addressing the public in response to a crisis. Woody Harrelson’s situation demonstrates the importance of understanding the audience before addressing them. Finally, the Dominoes episode highlights the potential negative effects of not attacking a crisis as soon as possible.