Sports PR is a field that truly lives up to the saying “everyday is different.” Whether the public relations team is handling a regular game night or taking care of an incident involving a player, things are always interesting.

A prime example is how social media played a large part in free agent DeAndre Jordan’s decision of what step he wanted to take in his professional basketball career. Jordan was torn between re-signing with his current NBA team, the Los Angeles Clippers, or signing to a new team, the Dallas Mavericks.

Jordan’s uncertainty led to a number of players from both teams taking their part in the big decision to Twitter. 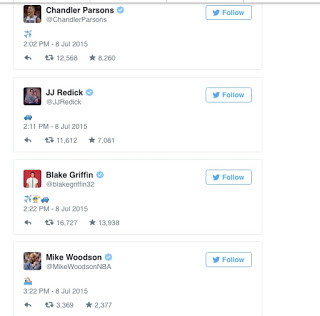 Next thing you know, more players started joining the Twitter emoji fun, even some who weren’t directly involved with the signing. Michael Jordan, often noted as the best basketball player ever, simply tweeted a goat emoji referring to himself as the “Greatest of All Time.”

Sports contracts and trade deals may seem irrelevant to those who are not sports fans, but they involve a high amount of business between managers and agents and seriously large amounts of money. Even ten years ago, you would have to stay tuned to the television or radio to hear the latest news. Now, players are announcing their decisions via social media before broadcasters report it.

Social media plays such a large part of a professional sports team off the field. It is not an easy job to monitor what players post about, but this situation definitely raises the question of if it should be allowed to handle business in this manner.