Is getting a new job one of your New Years’ resolutions? If so, now is the time to spice up your job application materials! I believe the most important part of the job application process is your cover letter.

Your cover letter is supposed to catch a prospective employer’s eye, but that’s easier said than done when it’s buried under a pile of applications. As a result, nearly every professional has his or her own advice when it comes to writing one of these formal introductions and bids for employment.

Instead of following the typical formula, why not try a more inventive technique to get your application noticed. Mashable highlighted these five innovative approaches yesterday:

1. The Direct Approach
Lindsay Blackwell wanted to be social media director of the University of Michigan. Instead of typing up a typical cover letter, the tried and (sometimes) true method, she created a website with a video directed at Lisa Rudgers, the university’s vice president for global communications and strategic Initiatives.

While Blackwell didn’t ultimately get the job, she did land an interview for the position — an impressive feat on its own.

Graeme Anthony, a PR practitioner looking for a job, uploaded his professional information to YouTube rather than creating a traditional cover letter and resume. Anthony’s interactive video application included a breakdown of his skills and timeline for potential employers. It showed his video-producing and editing knowledge as well as his ability to use online resources.

In the end, it helped him land a job at Manc Frank. If a simple series of videos is enough to get you noticed, the sky’s the limit.

3. The Power of Being Honest
Sometimes employers appreciate sheer honesty above well-written prose and assertions of dedication and passion. An unnamed applicant applied for a summer internship on Wall Street with a short but honest letter.

Whether the lack of embellishment helped secure the position for the student is unknown, but it made quite a splash online and proved that honesty really can be the best policy. 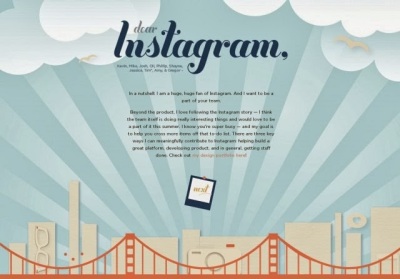 With a company as geared to the visual as Instagram, it can take more than a well-worded letter to catch the team’s attention.

Twenty-year-old Alice Lee used her design skills to create an interactive website, complete with an Instagram stream with the social network’s API. Instagram didn’t end up hiring Lee, but she did get to speak to CEO Kevin Systrom, and Lee’s site eventually led to an internship with another company.

5. Using Ads to Your Advantage

Most of us have Googled ourselves at least once or twice, if only to make sure that nothing strange turns up with our names. With that in mind, Alec Brownstein decided to buy ads that would appear when specific people searched for creative directors’ names, or more importantly, when said directors Googled themselves.

The ads led to Brownstein’s site with a message that simply read, “Googling yourself is a lot of fun. Hiring me is fun, too.” Brownstein now works at Y&R New York, and the ads only cost him $6. It isn’t exactly a cover letter, but it isn’t a bad strategy.

Which creative approach will you take?