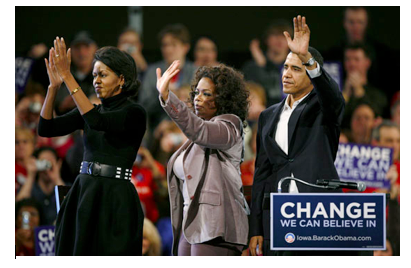 The audience a celebrity appeals to can potentially have a great impact on how those individuals vote. If a particular celebrity appeals to young individuals, these potential new voters may actively seek more information about the candidate and be more motivated to head to the polls. How the youth of America votes has been regarded as of crucial importance in this upcoming election. Candidates are employing several tactics in order to secure those young votes and celebrity endorsements can be a way to do just that.

On the other hand, the public’s perception of an endorser can adversely affect the candidate. It is no coincidence that brands often pick celebrities who are relatively scandal-free to be a spokesperson for their product. For example, Lindsay Lohan, a recent Romney supporter, has been a controversial endorser as her public image is marred by a party-girl reputation and numerous stints in rehab. The credibility of a celebrity can be reflective upon the candidate.

Celebrities have been more vocal about their political affiliation in recent years than ever before. Among the many factors that motivate us to vote for a certain candidate, should celebrity endorsements be one or is it already? Let us know what you think!
This guest blog post was written by PRowl Public Relations staff member Cara Graeff.